Han River Bridge marks the development of a youthful and energetic city and symbolizes the rising aspirations of the citizens. Designed by Vietnam engineers, Han River Bridge becomes the highlight embellishing Han River much more sparkling and dreaming.

Han River Bridge is the first swing bridge in Viet nam today. It is considered as a highlight adorning Han River much more sparkling and romantic. Inaugurated in 2000, Han River Swing Bridge has been one of proud symbols of Da Nang city and favorite tourist attractions in Da Nang alluring tourists. 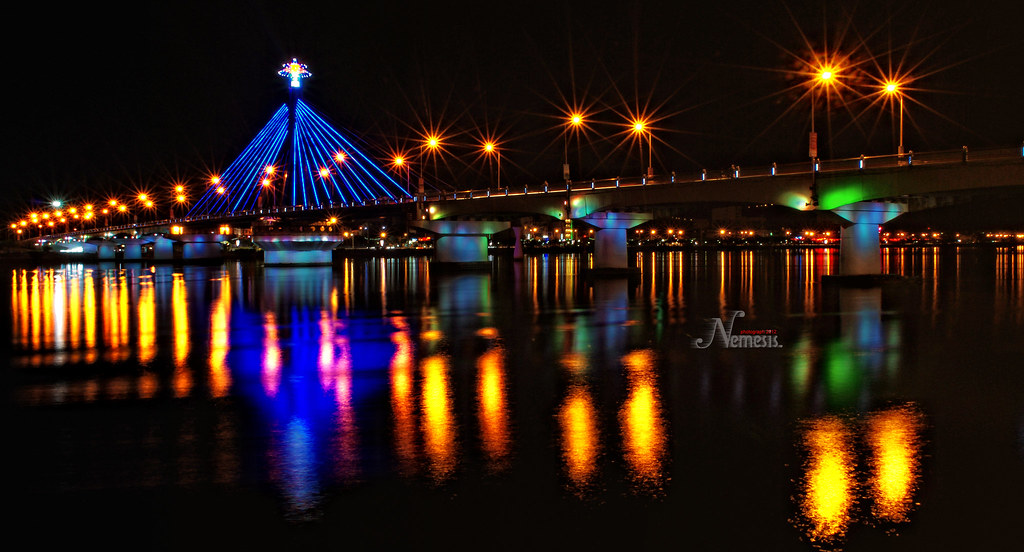 Not only is it the appealing attraction in Da Nang, Han River Bridge also creates favorable conditions for transportation, tourism, stimulates the economic potential of a large area on the east side of the city; simultaneously, the bridge is a proud cultural imprint of Da Nang citizens. Built with the contributions of people in the city, Han River Swing Bridge symbolizes new vitality and growing aspirations of the young Da Nang city. In addition, the image of majestic bridge standing before dreaming Han River increasingly embellishes the beauty of Da Nang – a youthful, civilized and modern city.

The bridge retains 487,7m long, 12,9m wide. It consists of 11 spans with 33m long each. The structure of beams is entirely steel; meanwhile, the bridge deck is reinforced with concrete. This is the first swing bridge designed and constructed by Vietnamese engineers. It is also one of the large-scale works, meeting the requirements of complex engineering and applications of new building technologies. However, all stages of the design – construction and operational processes are extremely perfect with high efficiency. Han River Bridge was recognized as “the works with typical quality for 5 years 2001 – 2005”. It contributes to affirm the brand of young city; simultaneously, creates an important premise for the economic development of the city, especially Da Nang tourism.

Find things to do in danang: temple, museum, pagoda those places should not be missed when travelling to Da Nang. 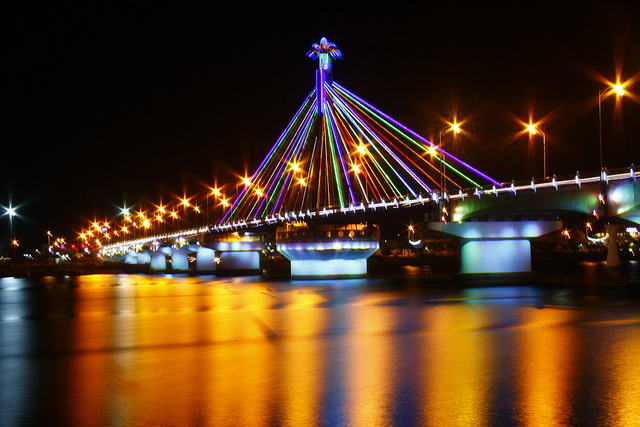 When the city lights up, both the river and the swing bridge seem to be dyed in brilliant color palette of the system of decorative lighting along the streets. Han River Bridge at that time becomes a splendid lighting architectural highlight among dreaming Han River. It seems that all poetic beauty of Da Nang only reveals in the most flawless way in the space of windy and cool Han River Bridge. Along with the shimmering beauty on the bridge, many tourists are actually curious to contemplate the movement of the bridge when it is rotated 90 degrees. The middle part of the bridge will turn 90 degrees around its axis at about 1:00 am and locates along the river’s flow in order to open the way for large ships to go through; then it will return at its initial position at about 3:30 a.m. The picture of Da Nang Swing Bridge thus always occupies an important standing in the hearts of city lovers.

Read more  the temple of literature 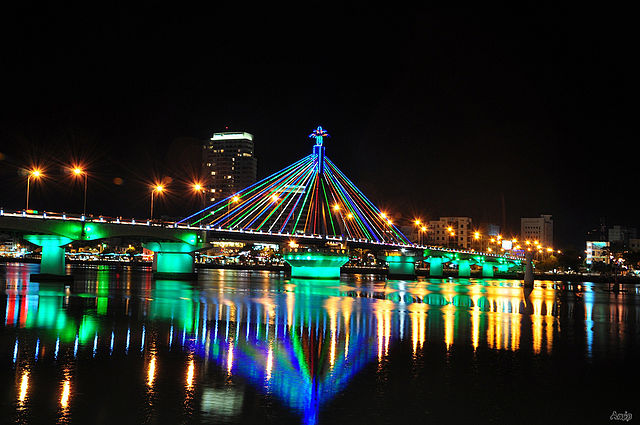 Not only are first-time tourists to Da Nang curious before moving moment of the bridge, but even Da Nang citizens are also excited to witness the sight. Looking at the bridge slowly moving, people can feel the change in this dynamic city day by day. It can be said that the bridge takes the mission “pave the way” for the city to construct more unique bridges in Da Nang. However, though later bridges are much modern and beautiful, they seemly not to replace the image of the swing bridge in the heart of Da Nang people in general and tourists taking part in Da Nang travel in particular.

Han River is seemly closer to tourists thanks to the appearance of the bridge – the works of art – the unique and diverse architectural works. Now people around the world know much more about Da Nang with the new image, namely “the city of the modern bridges”, bridges bring century stature and embody consensus.  The nature endows a beautiful and poetic Han River for Da Nang. The government and people of the city have made it much more romantic and attractive. Sparkling Han River – the brilliant lights seem to enhance the belief, the hope and the pride of Da Nang citizens on the young dynamic, creative, attractive and worth living city, which is on the path of development. Han River Bridge is worth an impressive tourist attractions in Da Nang attracting both domestic and foreign tourists.