What to see in festival of Kim Giang communal house

The communal house worships a town god name Mao Giap Hoa. The festival of Kim Giang communal house is annually held by residents in the region within 2 days from 11th to 12th of February (lunar calendar) to honor the merit of Town god and his mother. 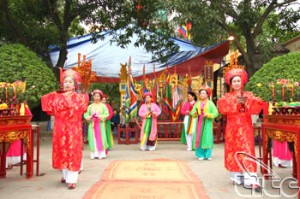 The festival’s program as below:

In the morning 11th of February, the opening ceremony is taken place after the noisy sound of drum. After that, the sacrifice for entering communal house and temple is conducted by village elders in traditional uniform. In the afternoon, the festival is continued with folk games such as cockfighting, Chinese chess and swing. At night, music performance takes place at Kim Giang communal house’s yard.

On 12th of February, main festival is started with the  procession of honor board from honor house to communal house and temple. Leading the procession is a group of dragon dance taken responsibility by village youths, then children pick Uncle Ho up, next is male and female priest. A team of sênh tiền dance is performed by children along road that brings funny atmosphere for the festival. The sênh tiền is a Vietnamese musical instrument. The senh tien is a combination of clapper, rasp, and jingle made from three pieces of wood with old Chinese coins attached by strings.

The program is continued with incense offering ceremony and reading funeral oration of Saint Le Mau at the communal house and the temple. Then, villagers and tourists will be received Saint’s blessing.

In the afternoon same day, other activities are organized to award games that won prize at the temple’s courtyard.

The Saint thanksgiving and closing ceremony are held by elders and participants on sunset.

The festival of Kim Giang village is annually organized to raise children’s awareness of the tradition of building and protecting country as well as improving the spirit of solidarity of villages surrounding.

Tags:hanoi travel, things to do in hanoi